Home > ⭐RDP⭐ > What is the Citrix ICA File and How to Fix its Download Error?

What is the Citrix ICA File and How to Fix its Download Error? 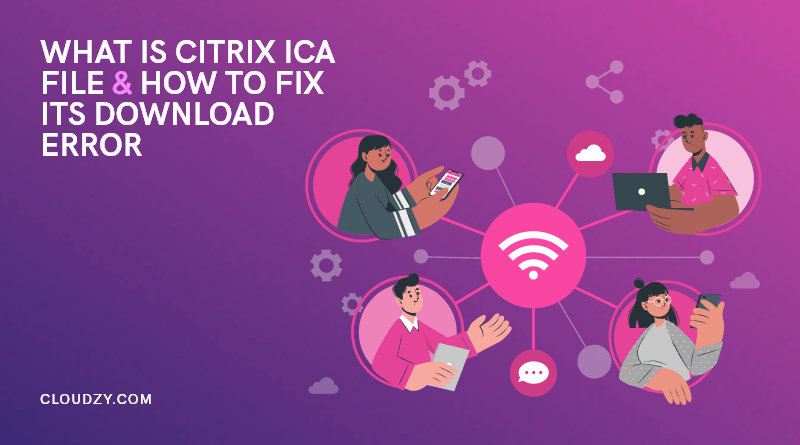 I’m going to guess you already know what a remote desktop is. A lot of people use it to set up a collaboration space or maybe even a virtual office for their employees. For more personal is Citrix is one of the solutions for setting up a remote desktop for your business. Citrix is actually the company’s name, which has come up with a line of products like Citrix Virtual Apps and Citrix Virtual Desktops.

While Citrix Virtual Apps is all about apps, their Virtual Desktops solution is more customized. Not only does it allow you to deliver software that you want to share with your employees over the Internet, but it also lets you give them a whole desktop experience. Of course, the same thing can be done using the Windows-native Remote Desktop Services. But, unlike the RDP-powered Remote Desktop Services, the Citrix ICA is more resource-efficient, taking up less bandwidth and fewer resources from the client’s system. That means even slower, older systems can easily use the remote app or desktop. The following section deals with this issue in more depth.

Citrix ICA is a rival for Microsoft’s Remote Desktop Protocol. RDP — when it comes to remote desktop servers, you are bound to hear these initials sooner or later. Standing for Remote Desktop Protocol, RDP is Microsoft’s solution to providing remote desktop connections over the Internet. Of course, there is a whole ecology of software and services by Microsoft that offer remote desktop access, including the Windows Virtual Desktop for Windows 10 Enterprise editions. Of course, there is a whole discussion on how Microsoft’s protocol compares to it. You can read more about it in this comparison of Citrix vs RDP.

The personal or user side of the remote desktop experience is simple clients like Windows’s own Remote Desktop Connection and apps like AnyDesk, TeamViewer, and the like. When it comes to the enterprise-level stuff, things are completely different. There are more than a few solutions to any remote desktop problem and they all cost a hand and a foot.

Now, Citrix is one of the less expensive alternatives that also takes slower, older systems and lower bandwidth into account. So, instead of forcing your employees to buy the latest gaming laptop or high-end phone, you can just consider using Citrix Virtual Desktops.

READ
RDP vs VNC: Which Remote Desktop Technology Should I Use?

Now, just as Windows’s remote desktop apps use the Remote Desktop Protocol (RDP), Citrix uses its own proprietary protocol, the Independent Computing Architecture (ICA). The Citrix ICA is mostly known for getting the work done even when there is low bandwidth and less resources on the receiving end. The ICA protocol is used by all Citrix software, so no matter if you’re supposed to work with the virtual desktop or the Citrix Virtual Apps, you will be using ICA. This is probably the reason why the Citrix .ica file is used to set up the web application. It’s this file extension that sometimes causes Citrix users some problems when they’re trying to connect to their company’s virtual office.

For some time now, Citrix client users have faced strange errors while trying to get the right application from the Citrix “web store.” When trying to get the feature they want, they are instead prompted to download, run, or open the .ica file. This has been a source of confusion for a lot of users, but, as the Citrix support website shows, it’s actually an error with a simple solution.

Actually, you don’t need to do any of these things. You just need to follow these steps to fix the problem.

Update Citrix Receiver, your remote desktop client, to the last version. Check to see if the problem is resolved. If not, move to the next step.

When prompted by the browser, download the .ica file and try to open it using Windows’s file explorer. You will be asked to select the application to open the file. Point Windows to Citrix Connection Manager (the Citrix ICA client). If the Connection Manager is not listed as one of the applications available, simply open the executable file from the following address:

*of course, if you have chosen a custom installation, the location will be the one you chose during installation.

Make sure to check the box next reading “Always use this app to open .ica files.”

Ensure the Max Performance of Citrix

Citrix Virtual Desktop is the latest version of Citrix’s product line, using the Citrix ICA protocol. It can be one of the most powerful ways of creating virtual offices for your employees, even on enterprise levels. Of course, you should consider that with a powerful enough server, you can simply dispense with the Citrix ICA client and its expensive and confusing apps and simply use the safe and straightforward RDP. Cloudzy, for example, offers powerful Remote Desktop Servers  unbelievably affordable costs. Running on the latest server hardware, featuring NVMe storage and DDR4 RAMs, Cloudzy’s RDP Server plans are the ultimate solution to remote desktop computing located in USA .