Home > Knowledge Base > 🛠Tutorials🛠 > How To Install Python On A VPS Server?| A Step-by-Step Guide

How To Install Python On A VPS Server?| A Step-by-Step Guide 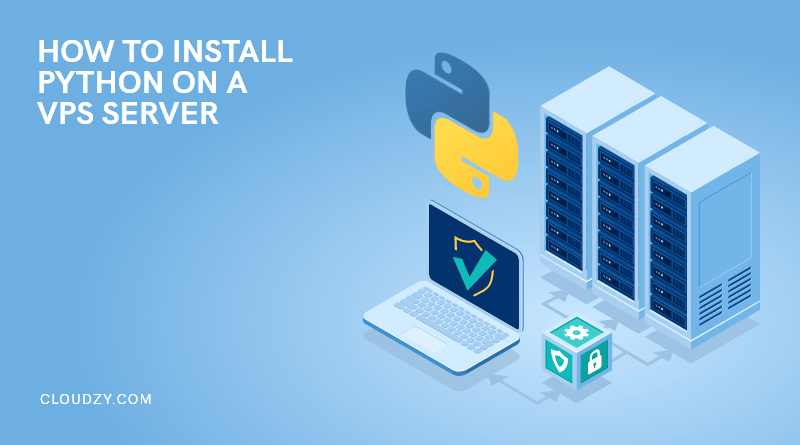 Python is a high-level, object-oriented, and powerful programming language used in many areas. This programming language provides you with many excellent capabilities, which have revolutionized the programming world. Users can use Python in different use-cases, from developing web applications to creating computer games.

Most Python keywords are simple and completely understandable, making it easy for beginners to learn and code. Despite many programming languages, Python doesn’t have complexities, and aside from this, its logic is entirely understandable. Moreover, as an open-source language, you can learn Python well in a short time and use it because of its comprehensive libraries.

In addition, Python is a scripting programming language that you can run on most platforms such as Linux, Windows, Macintosh, mobile systems, and even PlayStation. The question is how to install Python on a VPS Server? Particularity, how should you install Python on Linux or Windows VPS? This article will answer these questions and show you how to install it step by step. But before we talk more about installing Python on a server, it is wise to mention the primary purposes of introducing Python as a programming language.

What are the main advantages of the Python programming language?

This programming language is designed for the following reasons:

Also, you can run your scripts or different bots (such as sneaker bots) on a VPS easily Now you might be wondering how to install Python on a VPS Server (Linux and Windows)?

Before you install Python on Linux VPS, you should check whether it is already installed by default or not, as it is already available on most Linux VPS distributions. So you can type the following command in the terminal of the Linux VPS Server to be sure:

If you already have Python installed on your Linux VPS Server, you will see this as the output:

If you don’t have Python installed on your Linux VPS, The terminal will show you the following output:

Command’ python3′ not found. Did you mean:

How to install Python on VPS step-by-step?

First, you have to update your Linux Server using the below commands. You should note that different Linux versions need distinct commands for updating the Linux server. Additionally, if you are logged in with a root account, you don’t need to use Sudo for running commands, as you have all the essential privileges to execute various commands.

You can type the following commands to install Python on different distributions of Linux VPS.

Now that you have installed Python on your VPS Server, you should make sure that it is correctly installed by running the following command on the terminal:

As we mentioned in step 1, the following output will confirm that Python is installed on your Linux VPS:

Another question that might pop up in your mind is How to install Python on Windows VPS?

Python Programming Language is not installed on Windows by default. However, you can easily install it and use its capabilities.

Then select the Windows installer (64-bit) as the recommended version. When the first is displayed on your monitor, enable the Add Python 3.7 to PATH option and click on “Install Now.”

This option removes the existing restrictions on the MAX_PATH variable. You should note that selecting this option does not cause any problems with the operating system or other features. In other words, disabling the path limit only enables Python to use longer names for “Path” variables.

When we talk about the length of the name for path variables, Linux and most of its distributions have no limitations. So, when you install Python on Windows VPS, choosing this option is an essential help to solve the upcoming issues in this area. However, you can skip this step if you do not want to remove this limitation for the path MAX_PATH variable. At last, you should click on the Close button, so it completes the Python installation process in Windows VPS.

We have successfully installed Python on the Windows VPS, as you can see above. You will see the following output in the command prompt if you run Python.

Whether you’re a Virtual Private Server (VPS) supervisor, a software developer, or a user, you may need to install pip on your system. Pip lets you install various software packages written with Python programming language as a powerful package management system. In the following sections, we will describe what pip is, how it works, and how to install Pip on VPS.

What Is pip, and what is it used for?

Before we go over the pip installation tutorial, it’s necessary to understand what pip is and how it works. Pip stands for pip installs packages and is a command-line package management system for software written in Python. Once you have installed pip, you can install and manage Python packages from the command line or the terminal. /to put it simply, pip helps you during installing and managing Python modules and packages; because it connects to the Python Package Index (PyPI).

How to install pip on VPS?

Even though most installations of Python are preinstalled, you may sometimes need to manually install pip on your machine. You can install pip on all top operating systems, including most Linux distributions. This guide article will show you how to install and test pip on CentOS, Ubuntu, and Windows 10 operating systems. If you are using Linux, you should first login via SSH.

Also read: How to Change the SSH Port in Linux

Step 1: Before installing pip, you must add the EPEL Repo.

Step 2: Then, you should update your machine using the following command:

Step 3: Now you can install pip via the below command:

Step 4: we can type some simple commands to test whether the pip installation is successful or not.

You will have to use the apt package manager to install pip on Ubuntu.

Step 1: As mentioned in previous sections, First, you need to update your Ubuntu machine:

Step 3: Finally, you can execute this command to ensure that pip is installed correctly:

Step 1: you should open the command prompt.

Step 2: Check to see if pip is already installed on your machine:

Step 3: Then, you have to download the pip (.py file) from the Python Package Authority (PYPA):

Step 4: now, you can install pip using the command below:

Step 5: at last, you can verify the pip installation with the following command line:

if you have installed pip correctly, you will see an output similar to this:

Not only do you know how to install Python on VPS, but you also learned how to run python scripts on VPS.

To wrap up: how to install Python on a VPS Server?

Here we mainly talked about how you can install Python on VPS, particularly for Linux and Windows. We hope you can use this tutorial paper as a helpful resource to expand your knowledge of VPS Servers. We are also proud to offer you various Python Hosting solutions, hoping to provide you with the best services for you and your businesses. Our Python server hosting enables you to use Python’s power without limitations, as it provides you with an optimized Linux server with any distro you want. If you have any further questions, feel free to contact us.

How do I run a Python script from a server?

You can run Python scripts via python commands. You need to open a command line and type in the word Python, followed by the path to your script. For example, Python hello.py

What can you do with a VPS?

Mainly, you can use VPS to host your websites and develop, test, and launch your web app. Additionally, you can run your Forex trading bots or Expert Advisors with the help of VPS.

What are the differences between VPS and shared hosting?

When you use shared hosting, you get an account like Cpanel, Plesk, and shared resources with other users. But via a VPS, you have dedicated resources and privacy, particularly for you.

Why is pip installation not working?

Pip is Not Recognized as an internal or external command Python 3.x. This error usually means there’s an issue with the Python installation, or the variable PATH is not set up correctly. So it would be best if you tried reinstalling Python and all its components to fix the problem.