Home > Knowledge Base > 🛠Tutorials🛠 > How to Protect FiveM Server from DDoS Attack?

How to Protect FiveM Server from DDoS Attack? 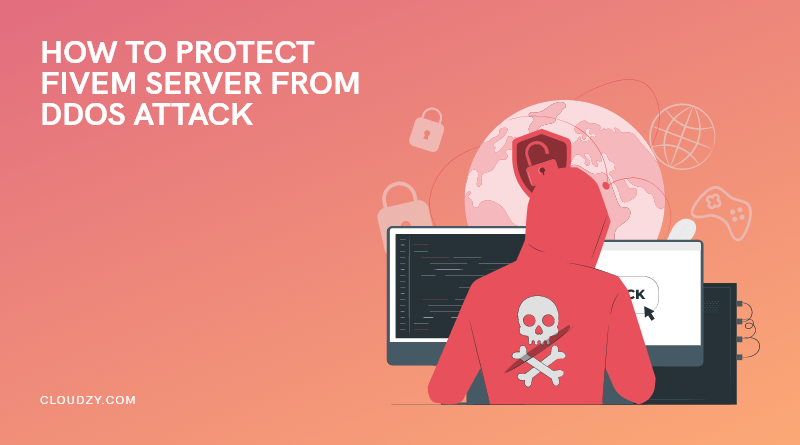 Get your Game VPS

In recent years, DDoS attacks have become increasingly common. They can be very costly for businesses and can cause a lot of damage. However, there are several things that can be done to help protect your FiveM server from being targeted by a DDoS attack and have an anti-DDoS FiveM.

At first, you need to understand what a DDoS attack is and why attackers learn how to DDoS a FiveM server. In this article, we will also discuss some of the methods that can be used to protect your server from DDoS attacks.

What Are DDoS Attacks?

A Distributed Denial of Service (DDoS) attack is a malicious attempt to make an online service, network, or website unavailable by overwhelming it with traffic from multiple sources. DDoS attacks can be launched against any type of organization, from small businesses to large enterprises and governments, and that shows the importance of having an anti-DDoS FiveM server.

There are many different types of DDoS attacks. The most common type is the volumetric attack, which involves sending huge volumes of illegitimate traffic to the target system. This can include spoofed requests from botnets and malware-infected computers that are controlled by hackers and used to launch attacks without the knowledge of their owners. It’s hard to defend against Volumetric attacks without having an anti-DDoS FiveM as they come from many different sources.

Why Do DDoS Attacks Happen?

One of the most common questions that arise after a high-profile distributed denial of service (DDoS) attack is why they even happen in the first place. Generally, there are many reasons that a DDoS attack might take place. Here are three of them:

One of the most common reasons is ransom. Attackers will launch a DDoS attack against a company and demand a ransom in order to stop the attack. This type of attack can be very costly for companies, and it can also cause a lot of damage. In some cases, in the absence of an anti-DDoS FiveM, companies may not be able to pay the ransom, and they may have to shut down their business.

DDoS attacks are often seen as a way to gain an advantage over a competitor. A company that is targeted by a DDoS attack may lose customers who can’t access their site and may also see their reputation suffer. In some cases, businesses have had to shut down completely after being hit by a DDoS attack.

Hacktivism is often cited as one of the primary reasons for launching DDoS attacks. Hacktivists are individuals or groups who use technology to show their support or opposition to a person, company, or political or social agenda.

But whatever the reason, it’s important to understand how these attacks work so that you can have an anti-DDoS FiveM.

A FiveM server is a great way to enjoy gaming with friends. However, it’s important to protect your server from DDoS attacks. If you are a Minecraft player, you might have heard of the SquidCraft Games tournament. A massive DDoS attack was launched on Andorra’s servers. This is why you should protect your hosting servers from DDoS attacks. There are a few methods that can help FiveM DDoS protection:

To enjoy an anti-DDoS FiveM and protect your FiveM server from DDoS attacks, you need to use a tool that can perform real-time packet analysis. Use a tool that flows data from your network devices to identify and block malicious packets before they can harm your server.

Packets are the lifeblood of computer networks. By analyzing packets, administrators can identify and mitigate threats, including DDoS attacks. There are a variety of packet analysis tools available, each with its own strengths and weaknesses.

One popular tool is Wireshark, which can capture and analyze packets on a network interface. It can be used to detect DDoS attacks by identifying unusual traffic patterns. Wireshark is available for Windows, macOS, and Linux.

Another popular tool is tcpdump, which can be used to capture packets on a network interface or read from a file. tcpdump can be used to detect DDoS attacks by identifying suspicious packets, such as those with unexpected source or destination addresses. tcpdump is available for Windows, MacOS, and Linux.

Another option for FiveM server DDoS protection is to use a cloud-based DDoS protection service. This type of service can help to protect your business from DDoS attacks by mitigating the attack traffic before it reaches your network.

These services utilize large networks of servers that can absorb and mitigate DDoS attacks. They also have the ability to quickly adapt to new threats, making them a good choice for protecting high-traffic servers.

A cloud-based anti-DDoS service is a good option for businesses that want to protect themselves from DDoS attacks. These services are typically affordable, and they can help to reduce the risk of an attack reaching your network. In addition, these services offer 24/7 monitoring and mitigation, which can help to keep your business protected at all times.

One of the other popular approaches for having an anti-DDoS FiveM server is to use a dedicated DDoS defense system. This type of system is specifically designed to protect servers from DDoS attacks. It can identify and block malicious traffic before it reaches your server and helps to prevent attacks from causing damage or taking the server offline. This system can help to mitigate the effects of the attack and keep the game server online. It uses a variety of methods to protect against DDoS attacks, including blackholing and bandwidth throttling.

For FiveM DDoS protection, deploy a web application firewall (WAF). A WAF is a device or software program that sits in front of your web applications and protects them from malicious traffic.

In order to protect your FiveM server from DDoS attacks, you can use rate limiting. Rate limiting is a useful FiveM DDoS protection technique because it can help to mitigate the impact of large spikes in traffic.

Consequences of not Having an Anti-DDoS FiveM Server

If you’re running an anti-DDoS FiveM server, you’re opening yourself up to attacks that can take your server offline. DDoS attacks are becoming more and more common, and they can be very difficult to defend against.

Servers that are targeted by DDoS attacks can experience outages, packet loss, and slow response times. This can lead to players being disconnected from the game, or having their gameplay experience ruined. In some cases, a DDoS attack can even take your website offline for hours, or even days. And if your website is down, you’re losing money.

An anti-DDoS FiveM server can help protect against these types of attacks. By filtering out malicious traffic, it can help keep the server online and responsive. This can be especially important for gaming communities, which rely on servers to keep players connected and engaged.

So if you’re not using an anti-DDoS FiveM server, you’re putting your business at risk.

In conclusion, there are several ways to protect your FiveM server from a DDoS attack. Implementing some or all of the above-mentioned methods can help you have an anti-DDoS FiveM server and keep it safe and secure. Remember to always keep your server up-to-date with the latest security patches, and be vigilant in monitoring for any signs of an attack.

Can you DDoS a FiveM server?

Yes, you can. However, there are a few things to keep in mind. First and foremost, it is important to understand that DDoS attacks are illegal. You could face criminal charges if you are caught conducting a DDoS attack. Additionally, FiveM servers are often better equipped to deal with DDoS attacks than standard game servers. That said, if you want to launch a successful DDoS attack against a FiveM server, you will need to be patient and willing to put in all the necessary time and effort.

What does DDoS mean in FiveM?

DDoS stands for Distributed Denial of Service and is a type of attack that can be launched against a server. When a DDoS attack is carried out, the server is flooded with traffic from multiple sources, which can cause it to become overwhelmed and crash. This type of attack can be very damaging to businesses and can result in losing revenue.

Armin Potter
Armin is a passionate full-stack web developer who enjoys writing content. He is constantly learning and expanding the horizons of his knowledge over numerous topics that he is interested in.

Get your Game VPS