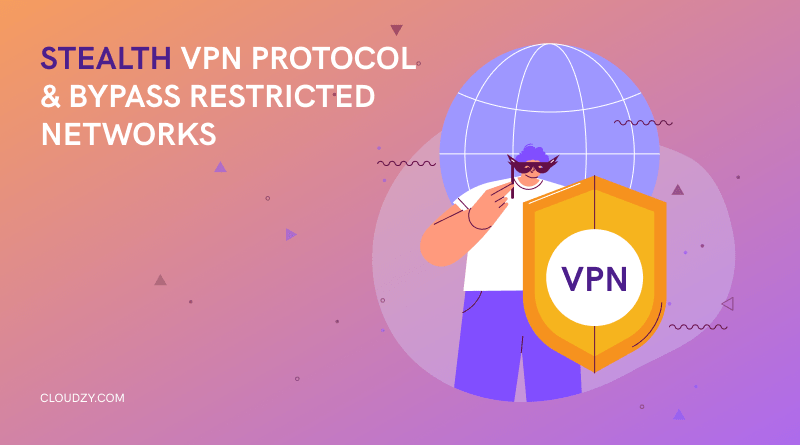 Can you think of some type of activity or service that doesn’t require an Internet connection? Not many answers come to mind, right?

90% of all services and operations happen online, which means everyone needs to access the Internet at all times. But unfortunately, some countries and governments restrict network access, and they are pretty good at it! Fortunately, there’s always a loophole or a workaround that we can use. It’s like that old saying: when there’s a will, there is a way.

VPN was one of the first solutions to bypass network restrictions, but soon enough, problems started appearing. Some major companies like UpWork, PayPal, and Netflix figured out a way to detect and block VPNs. Now the secret is out, and almost every other company or entity can do this too. How?

READ
Why Should I Get A VPN? A Comprehensive Answer To "Why Use A VPN?"

What is Stealth VPN?

Stealth VPN is not an app but a specific protocol that masks VPN traffic as normal traffic by scrambling the patterned data flow of typical VPN networks. Cybersecurity experts can detect normal VPN technology, but Stealth VPN protocol has got them stumped, at least for now.

What Is Stealth Technology & Where Does It Come From?

Some Airforce planes are designed to be undetectable by radar, like the F-22 Raptor, and they’re called Stealth aircraft. Although Stealth aircraft are not 100% invisible to all radars, they can bypass high-frequency radars. Stealth technology used in these kinds of planes is basically the same tech used in the Stealth VPN protocol.

How Does Stealth VPN Protocol Work?

Regular VPNs, even the popular ones, use UDP (User Datagram Protocol), which makes them vulnerable to firewalls and VPN blockers. Whereas Stealth VPN protocol operates on TLS (The Transport Layer Security) tunneling, encrypting all data sent or received by the user.

So how does Stealth VPN protocol bypass Internet filters and restrictions? Through obfuscation technology.

Let’s use a simple analogy to explain obfuscation technology. Do you remember the scene in ”Harry Potter and the Deathly Hallows Part 1,” when Harry’s friends drank the Polyjuice potion and transformed into Harry to mislead Voldemort and the Death Eaters? Obfuscation is the Polyjuice that turns your VPN traffic into regular web traffic so Death Eaters_VPN blockers_ cannot spot you.

Proton VPN is one of the most secure and reliable VPNs on the market that offers unique features such as Secure Core VPN and VPN accelerator, but they have upped their game by releasing the Stealth protocol.

You can use the Proton VPN Stealth protocol on your Android, macOS, and iOS devices. No Windows or Linux release for now.

The best thing about Proton VPN Stealth protocol is that it’s available for both premium and free users. So everyone can use Proton VPN as their unblockable VPN.

We designed our Stealth protocol from the ground up to not have these issues. With Stealth enabled, your Proton VPN connection will be almost completely undetectable.

How Does OpenVPN Stealth Mode Work?

Which Stealth VPN is the Best Option for Netflix?

Netflix uses powerful VPN blockers that can detect your VPN IP address and ban you from using the Netflix servers. However, with the Stealth VPN protocol, you can bypass the Netflix VPN ban. ExpressVPN and NordVPN are both great options for fast and secure streaming. If you want to use a budget-friendly Stealth VPN that is super fast, NordVPN is the better option. You can also use a WireGuard VPN on a Ubuntu server for accessing Netflix. Here is a full detailed guide on installing Wireguard on Netflix VPS.

Which Stealth VPN Works Best in Iran and Russia?

According to PCMag, Proton VPN, which offers its Stealth VPN protocol for free, is already seeing more and more connections from Iran and Russia. This proves that Proton VPN is currently the best Stealth VPN for users in these countries.

Since there are a lot of Android users outside the US, Proton VPN can send the Android APK directly to people upon request. You can contact their support team for more information.

Which Stealth VPN can Bypass the Great Firewall?

NordVPN is the best Stealth VPN to bypass the Great Firewall because of three important features:

When Stealth VPN protocol is enabled, your web traffic appears like normal HTTPS, which is cool but not enough to battle VPN-blocking protocols and Internet censorship in authoritarian regimes like Iran, Russia, Cuba, or China. In Iran, it’s almost impossible to access the Internet freely, even if the Stealth VPN protocol offers alternative routing.

VPN blockers use advanced technology that detects VPNs in seconds. Besides, with everything being online, whether it’s your work projects and meetings, online courses, or your own business, you need a more robust and secure way to access the Internet without restrictions.

The best way to mask your IP and bypass geo-restrictions is to move to another country or be there virtually. When you are connected to VPS servers in, say, Italy, it’s as if you are accessing the Internet from that country; you’re not physically there, but it looks like that to online snoopers.

Investing in a reliable and fast VPS means no one will be able to detect your true location, especially when we have VPS servers in 15 locations worldwide. If you want to bulletproof your online connections, activities, transactions, etc., check out our services without worrying about losing your money; we offer a 7-day money-back guarantee.

Cloudzy VPS exists to make your online experience as secure and fast as possible.

Why Pay for a VPN When You Can Create Your Own?

Instead of paying for a premium VPN and constantly wondering whether your traffic is monitored, logged, or sold, you can invest your money in a reliable VPS and host your VPN on a VPS server. When you buy a VPS server, especially a dedicated one, you have complete control of hardware resources in an isolated environment, shielding you from all sorts of cyber threats and hackers.

Having your personal VPN on a dedicated VPS server means no third-party organization can snoop on your online activity; you are basically invisible.

Creating your own VPN requires basic technical knowledge, like running codes in the command line, but it’s not a complicated process. Tons of online resources can walk you through this process. Here’s a great reference:

How to Setup WireGuard VPN on VPS | Ubuntu Guide

Take a look at all the benefits that come with deploying your VPN, and you won’t ever go back to buying so-called 100% secure VPNs:

There are many prominent VPS providers you can choose from, but despite their friendly-looking websites and chatty support team, you cannot trust all of them. You should find a trustworthy VPS company that goes above and beyond to protect your privacy. 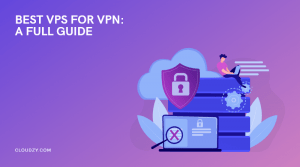 Cloudzy is one of the best and reliable VPS providers with the most budget-friendly packages. With over 15 data centers located in the most popular cities in the world, including New York, Washington, London, Frankfurt, etc., you can easily bypass online censorship without experiencing downtime.

If you run a business and want to minimize security risks, such as data leakage or theft and all types of cyberattacks, you definitely need to create your own VPN. If every one of your employees uses different VPNs each time they log into company systems, there’s no end to how much vulnerability your servers face.

Why is Linux VPS the best option for businesses?

Everyone knows that Linux is the most secure operating system, so it’s the best option for business owners who handle classified or sensitive information. If you have coding knowledge and want to develop your business app most safely and securely, Linux VPS is the right way to go. Using Linux VPS is like setting a secondary safety lock on an already secure operating system, but you don’t want all of your employees to access VPS resources. The best solution to keep your data secure, is to host a VPN on your Linux VPS.

All customers should have the right to test Cloudzy’s services; that’s why we offer 7-day money-back guarantees on all our plans.

What does Stealth protocol mean?

Stealth protocol is a specific and powerful VPN protocol developed to make your VPN traffic look like regular web traffic to every online snooper or tracker.

What is the strongest VPN protocol?

Even though the Stealth protocol is fairly new, it’s already receiving great feedback in terms of reliability, resource-friendly, and security.

Wireguard vs Stealth, which one is better?

Wireguard is one of the most secure VPN protocols, but some users reported privacy issues which can be concerning. So in terms of privacy, security, and efficiency, the Stealth protocol is the better option at the moment.

Is Stealth VPN an unblockable VPN?

Even the best Stealth VPN is not an unblockable VPN because it cannot bypass ALL firewalls and VPN blockers.

What is the best Stealth VPN to use for free?

The best Stealth VPN to bypass Internet censorship is offered by Proton VPN. Users can use the Proton VPN Stealth protocol for free.

Does the Stealth VPN protocol hide my IP address?

Yes. All VPNs mask your real IP address, and with a Stealth VPN, the chances of being detected by VPN blockers reduce significantly.

Which is the cheapest Stealth VPN in 2022?

Surfshark VPN falls into the best Stealth VPN category and offers the most pocket-friendly deals for everyone.

Which is the best VPN protocol to use? 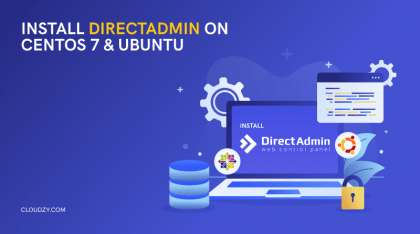 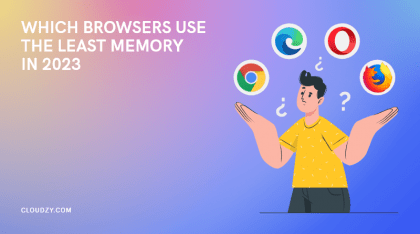 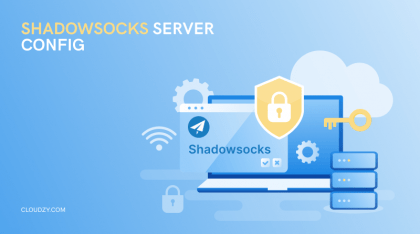