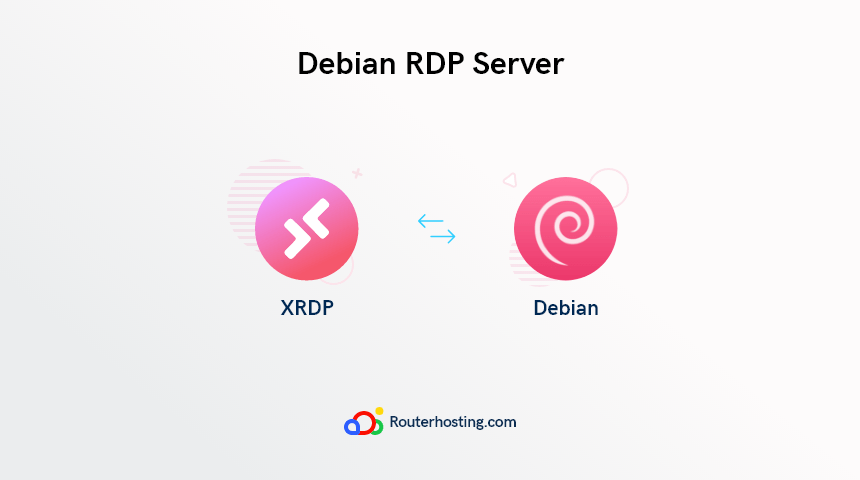 Debian is one of the most popular Linux distros that has been used by a lot of Linux users. And some of the other popular distros like Ubuntu and Fedora are its subsidiaries. If you wish to use RDP on a Debian Linux Server, using an XRDP service can be your solution. This article introduces this service and its related terms and concepts.

Table of Contents hide
1 What is a Debian RDP Server?
2 What is the RDP Protocol?
3 What is Debian Linux?
4 What is the XRDP Server?
4.1 How to install XRDP Server on Debian?[Debian RDP server setup]
5 Debian RDP Setup Video[Install XRDP for remote desktop server]
6 Conclusion
7 FAQ
7.1 How can I access RDP in Debian?
7.2 Can you RDP from Linux (Debian or other distributions) to Windows?
7.3 What port does XRDP use?
7.4 Is XRDP encrypted?

What is a Debian RDP Server?

As you may already know, one of the most significant problems for Linux users is working with Remote Desktop (RDP) Services. Since Linux servers don’t have a pre-installed DE (Desktop Environment), an implementation of Microsoft RDP is used for providing a fully RDP-compatible experience. Therefore, a Debian RDP server is working with an open-source Remote Desktop Protocol server named XRDP.

XRDP provides a graphical login to a remote machine via Microsoft Remote Desktop Protocol (RDP). It can also support two-way clipboard transfers (such as files, text, and bitmap), audio redirection, and drive redirection. But in order to know the Debian RDP Server well, let’s talk about the RDP, Debian, and XRDP in more detail.

What is the RDP Protocol?

The Microsoft RDP Protocol provides remote display and allows users to control their remote desktops as if they were working on it locally. The basic function of RDP is transmitting an output device from the remote server to the client, and the input device (keyboard/mouse) from the client to the remote server. This connection is extremely asymmetric, and by default is encrypted via RSA’s RC4 block.

If you wish to connect to a Debian or Ubuntu machine from a Windows desktop, you need to utilize an RDP connection. This connection will be established via XRDP. This connection doesn’t need any configuration but you will be asked to use your Linux credentials for connecting.

READ
Debian vs Ubuntu: What’s the Right Linux Distro for You?

What is Debian Linux?

Debian is open-source and free software that was first introduced by Ian Murdock. This software is a Linux distribution developed by the community-supported Debian Project. This is a Unix-like operating system based on the Linux kernel that numerous packages run on it. Debian GNU/Linux is:

As we mentioned before, Debian/Linux servers don’t have a pre-installed Desktop Environment. So, you have to install a DE in your Debian repositories. One of these DEs is XRDP.

What is the XRDP Server?

XRDP is one of Remote Desktop Server’s implementations that enables Debian and other operating systems such as ubuntu Xrdp other than Windows to connect to another desktop, remotely. This is an open-source and UNIX-like package that works by bridging graphics from X Windows System to the client and vice versa. For connecting to Debian, XRDP requires the XORG module, which allows the X server to act like X11rdp.

In order to have a good experience with Debian RDP Server, you need XRDP and XORGXRDP. Because XRDP depends on XORGXRDP, installing XRDP is enough. This implementation primarily targets GNU/Linux and is tested on PowerPC, SPARC, X86, and X86_64.

How to install XRDP Server on Debian?[Debian RDP server setup]

In order to install the XRDP package, run the following command:

Once the installation of this Debian repository completes, the XRDP service will start automatically.

You can verify that the service is running by entering:

This code will show an output like the below:

In this stage, you have to add the XRDP user to the group “ssl-cert” group:

Restart the XRDP service for changes to take effect:

✅ Now, XRDP is successfully installed on your Debian System and is ready to use.

This article covered the RDP Debian Server. We explained how to install XRDP on a Debian system. Now, you can connect to your remote desktop and manage it through a graphic interface from Windows, Linux, or macOS.

In the Windows Search bar, type “remote”. Then, click on “Remote Desktop Connection”. RDP client will be opened.

Can you RDP from Linux (Debian or other distributions) to Windows?

Yes. In order to connect from Linux OS to Windows computers and servers, you need to use an RDP client. this client can be FreeRDP, Remmina, Vinagre, TingerVNC, TeamViewer, RealVNC, NoMachine, KRDC, X2Go, or rdesktop.

What port does XRDP use?

On all interfaces, XRDP listens on port 3839/TCP by default. So make sure your firewall accepts connection to 3839/TCP from your location.

Table of Contents hide
1 What is a Debian RDP Server?
2 What is the RDP Protocol?
3 What is Debian Linux?
4 What is the XRDP Server?
4.1 How to install XRDP Server on Debian?[Debian RDP server setup]
5 Debian RDP Setup Video[Install XRDP for remote desktop server]
6 Conclusion
7 FAQ
7.1 How can I access RDP in Debian?
7.2 Can you RDP from Linux (Debian or other distributions) to Windows?
7.3 What port does XRDP use?
7.4 Is XRDP encrypted?