How to Install GUI on CentOS 7 [Complete Guide] So, one way or another you’ve wound up with a minimal CentOS 7, which is basically a command-line without a Graphic User Interface. That’s ok. It happens to the best of us. Maybe you forgot to select the GUI during installation or maybe it came with an “affordable” Linux hosting plan you chose. Whatever the case may be (maybe it’s not even CentOS but Ubuntu you need to install a GUI desktop on? Read my guide to install GUI on Ubuntu Server), you’re now stuck with a command-line-only operating system on your server.

Hardcore Linux coders and server admins might actually prefer this setup to a GUI, but if you’ve just started out or even an intermediate-level admin or coder, you will need to simplify things with something a little more friendly, say the GNOME GUI. As it turns out, it’s actually not that difficult to install GUI on CentOS 7 and here we’ll walk you through it, step by step. First, let’s get oriented. You’ve got a minimal CentOS 7, so you should find yourself staring at something like this: 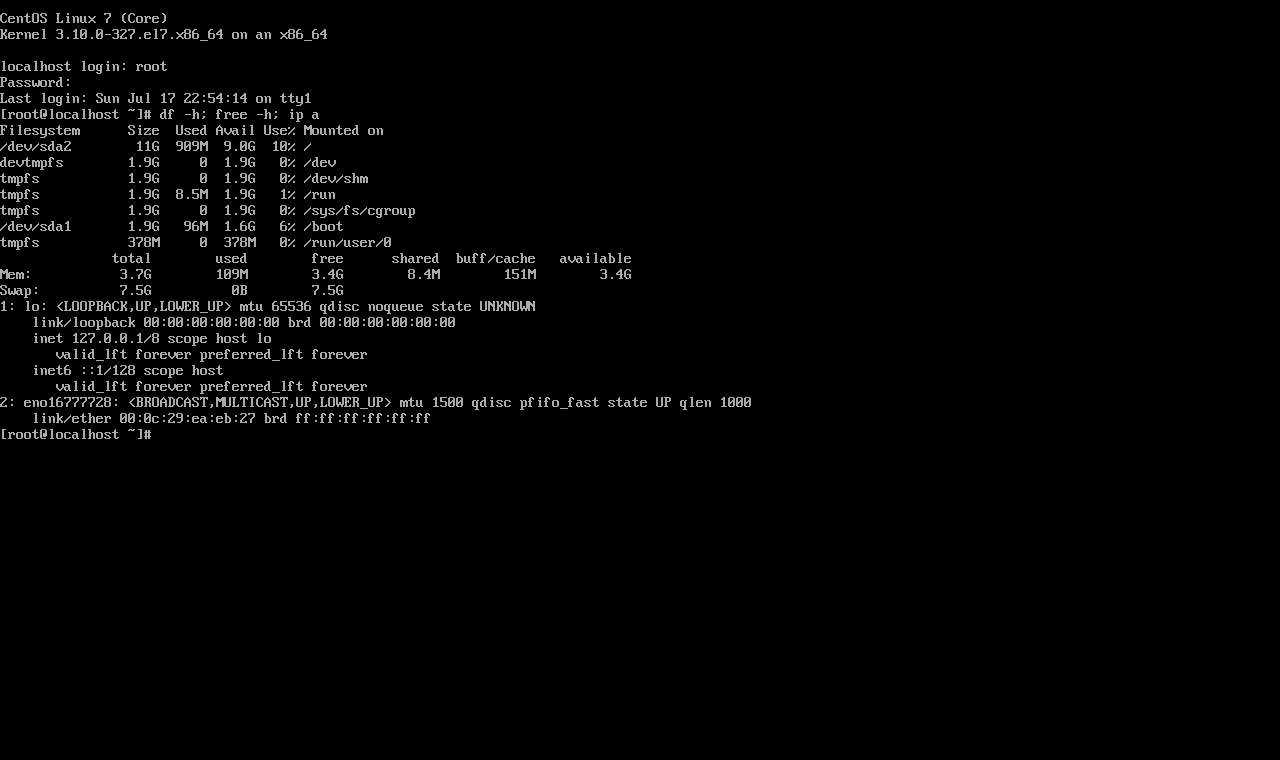 This is a Command-Line Interface or CLI and it is text-based. To get your new GUI up and running, you only need a working internet connection. For the rest, just follow these simple steps. There are different GUIs you can install on your CentOS server and all of them come with their own signature design and different features.

It’s up to you to choose which desktop environment you want for your CentOS server. Here we’ll look at three popular choices. First off is the GNOME desktop, a popular choice for many Linux distros. Remember that you need to be the root user or have a user with “sudo” rights in order to install GUI on CentOS 7.

How to Install GUI on CentOS 7?

Now we are going to tell you how to install GUI on centos7 using 3 different GUIs in the following lines. So you can choose any of them based on your needs.

GNOME is among the first GUIs to be released for Unix-like systems, like the various Linux distros, FreeBSD, etc. and it is completely open-source. GNOME is perhaps the best choice for a CentOS server since it’s resource-efficient and looks sleek as well. To install GNOME on your CentOS 7, you first need to update your packages and for that, you need to use yum. Yum is CentOS’s native package manager, similar to Ubuntu’s apt command. To update your server’s packages, you need to run the following command in the CLI:

Now that you’ve upgraded everything, it’s time to get down to the real business of installing GNOME, which is pretty simple, actually. Run the following command to download and install GNOME desktop once the update is done:

Now, this can take up quite a while, depending on your internet connection, since the GNOME desktop installation files are not exactly light at around 700 to 800MBs. Once the download and installation are done, you will find yourself back at the old command line, as if nothing has happened. To make sure that something does happen, we need to configure and run the X Window System, which is basically responsible for running the GUIs. To run the X Window System, we will use the startx command, but before that, we need to tell it which desktop environment to run, and of course, we’re going to assign the newly installed GNOME shell. To do that, we need to issue the following command:

Now X Window System knows to run the GNOME desktop and with that, you’ve finished the installation.

Now, let’s run GNOME and see if things worked out, using the command to start the X Window System:

If everything has gone as planned, you will soon be greeted by your brand new GNOME desktop GUI. If you’re seeing something like this, you can finally sigh with relief, since you’ve finally managed to install GUI on CentOS 7. But what about the next time you want to log in to your server? Will you have to run the startx command every time you reboot CentOS? Well, yes but there are ways to correct that as well. If you don’t want to see that bleak CLI text-scape every time you log in, you should open your terminal (CTRL + ALT + T will do it, among other things) and issue the following command:

That should tell your CentOS to automatically load and run the current GUI shell, GNOME desktop in this case, whenever it’s booting up. Now let’s test this and reboot the server. No need for commands this time since you can do it via the GUI. When your CentOS is back up, you should be greeted by the GUI login screen, looking something like this (the John Smith is incidental, by the way!). Easy, right? Now you’ve got yourself a user-friendly GUI on your minimal CentOS 7, which is minimal no longer. But wait, what if you don’t want to go in for GNOME? Well, luckily we’re also going to show you how to install KDE and MATE as well, so if you don’t like GNOME, you’ll have plenty of options. Next up is KDE.

Also Read: How to install PPTP VPN on CentOS 8?

How to Install GUI on CentOS 7: KDE Plasma

Basically, the steps are the same as installing GNOME. First off start with updating yum using:

Once that’s done, you need to download and install KDE using the following command:

This will take a while, depending on your system specs and an internet connection, because it’s going to download a big installation file and then set it up. When it’s done, run the following command to introduce it to the X Window System:

Now, all that remains is to run KDE Plasma and see if the steps we’ve taken so far have worked correctly. Start the X Window System with:

After a while should be greeted by this landing screen: Congratulations, now you’ve managed to install GUI on CentOS 7 yet again! To make KDE your default GUI and to tell CentOS to load it automatically on bootup, you need to run the following command, just like you did with GNOME:

Now, you will get to log in via your new GUI every time. Now let’s move on to MATE, another favorite desktop environment, and the final one we’ll teach you how to install here.

How to Install GUI on CentOS 7: MATE

MATE is one beautiful shell and it’s a great choice for the aesthetically minded. Installing and running it is almost exactly the same as GNOME and KDE, so we’ll go over it more briefly. First, update your server packages using:

When that is done, let’s download and install MATE:

This will take some time and when it’s finished, you need to finalize the installation by assigning it as the current desktop environment:

Now, as in the other installations, run the X Window System to test the new GUI:

If you’re looking at the beautiful scene below, you’ve succeeded at installing the MATE GUI on CentOS 7. Now all that remains is to make sure it is automatically loaded every time you reboot your CentOS 7 server by running the following command:

So now you know how to install GUI on CentOS 7 after finding yourself trapped in a text-only minimal installation. The good thing about Linux distros like CentOS 7 is that you can even have all three desktop environments at once, choosing which one you like by selecting it from the log-in screen.

This freedom to choose whatever features you want for your server is only one of the advantages that Linux offers. Deciding to go for an affordable Linux hosting plan, like a robust Linux VPS, and configuring it to match your needs is a great way to get optimal performance without paying exorbitant prices for high-end dedicated servers with features you will never use.